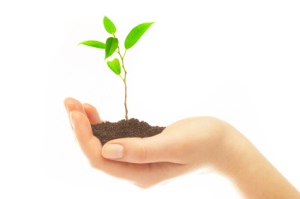 (Why do I often bite off more than I can chew?  I’ve decided to turn this into a 3 part series due to the length.)

I’m not going to even bother answering this question with a “yes” or a “no.”  Instead, I am going to explain why we have no other choice than to feed the world sustainably (via a little history lesson and a critique of the status quo.)  And finally I will share some awesome, yet little known examples of how others are already doing so.

But first let’s start with a definition for “sustainability.”  According to a 1999 WSU publication, the most popular definition of sustainability can be traced to a 1987 United Nations conference.  It defined sustainable developments as those that “meet present needs without compromising the ability of future generations to meet their needs” (WECD, 1987).  Robert Gillman, editor of the In Context magazine, extends this goal oriented definition by stating “sustainability refers to a very old and simple concept (The Golden Rule)…do unto future generations as you would have them do unto you.”

Technically, the Iroquois Nation mentioned this idea long before 1987.  “Look and listen for the welfare of the whole people and have always in view not only the present but also the coming [seven] generations…”  (Also of interest is that the meaning of number 7 in Hebrew, from the root savah, is “to be full or satisfied, have enough of.”)

With such a sensible life goal, how did we get to such an unsustainable place?

A BRIEF HISTORY OF CHEMICALS AND COMPOST

Photograph: Mike McGregor at The Guardian

(This is based on a summary from the notes that I took from Joel Salatin‘s seminar,”Can We Feed the World Sustainably?” at the Reformation of Food and the Family conference.  FYI, I’ve already put in a request to live next to the Salatins in heaven.  Dibs!)

In 1837, Justus Von Liebig espoused the idea that all living things are a ratio of nitrogen (N), phosphorous (P), and potassium (K).  He didn’t see a holistic view of life including trace minerals, enzymes, etc.  He instead developed a mechanical view of life.  It was no longer considered to be biologically special.

Around the same time, Cyrus McCormick invented the mechanical reaper (to harvest crops) which helped to kick-off the industrial revolution.  Though their were obvious benefits to this season of American History, the shift away from the value of sustainable agriculture has become a major negative consequence.

And finally, Charles Darwin was in deep development of his theory of evolution.  (Which, if you agree with him, logically leads that you shouldn’t care about feeding the world, because those who die of starvation – much like the examples of the other species that he observed had experienced – are simply on the unfortunate end of “natural selection.”)

During this decade, their was a convergence of industrial agriculture and the mechanization of life.  While God – and consequently his special care and design for humans and creation – was being taken out of the picture.

1910 was a very crappy year – literally.  There were approximately 20 million draft

animals (horses, oxen, etc.) and the societal innovation was mass urbanization.  One of the common editorials of that time was the prediction of the collapse of the city because they were imploding with animal manure and the natural consequences of not knowing what to do with it (open sewers -> poor hygiene -> measles and undulant fever outbreaks, etc.)  This led to a fear of massive famine because there was no more West to conquer.   And this began the worldwide quest to solve the soil fertility issue.

Soon after, Henry Ford began mass producing another beloved machine – the automobile – which eventually solved the manure over-production (among other benefits), but distracted the world from caring as much about soil fertility and what to do with manure.

Fast forward to World War II, and Von Liebeg’s NPK (Nitrogen, Phosphorous, Potassium) discovery had been developed into a basis for explosives and ammunition in the war efforts.  NPK got full governmental funding and the blessing of the culture.

Meanwhile, during the middle of the war in a quiet corner of India, British botanist Sir Albert Howard, refined the traditional Indian composting system and developed organic farming techniques (documented in his book, An Agricultural Testament.)  He later became a principal figure in the early organic movement and even inspired and influenced future organic farmers, notably J.I. Rodale of the Rodale Institute.  But despite the answer to a decades long question of how to finally deal with animal manure (and the amazing by-product of compost’s nourishing effect on agriculture), his discovery was not heard ’round the world because of poor timing and the hard work required to make it happen.

You see, folks were just starting to pick their lives back up after the war, many going back to farming.  And the government had an abundance of NPK to get rid of and efficiently made it into chemical fertilizer.  (Compost didn’t have the same war effort funding.)

So you are a tired, new farmer, inheriting depleted soil.  Do you want to pay pennies for a bag of stuff to spray on your fields, or shred and shovel biomass to make slow-growing compost?  The discovery of composting was made much easier in the 1950s by the new innovation of tractors, rural electrification, chippers, etc. but it was too late.  The addiction to chemical fertilizers was ingrained.

Now, in current farming techniques, the compost side of the agricultural wars is spinning circles around the mechanical side.  Joel Salatin gives an example from his own farm.  “With good, controlled grazing (including allowing the cow manure to be composted back into the pasture by an army of scratching chickens), we are moving these cows every day to a new patch, and we’re averaging 400 cow days per acre, as opposed to an average of 80 cow days from our local conventional counterparts.”  (A “cow day” is what one cow will eat in a day.)  “I’ve never bought a bag of fertilizer or planted one seed.  I’m a grass farmer.”

THE BOTTOM LINE:  “If we would have had a Manhattan Project for compost, not only would we have fed the world, we would have done it without a dead zone the size of New Jersey in the Gulf of Mexico.  The “NPK Paradigm” has so consumed the culture that the average person can’t even conceive that here is a viable alternative to chemical farming.  It’s like mentioning homeschooling to the local public school superintendent.  We tend to be very myopic.  If the only tool in your box is a hammer then every problem looks like a nail!  Read eclectically and widely.  Filter it through your worldview, spit out the chaff, and you may be surprised by what you learn.”  – Joel Salatin, 2012 (Love this guy!)

Stay tuned for a critique on the current system (Part 2) and a hopeful future for food (Part 3.)

What are your thoughts on the history of our food systems?

2 thoughts on “Can We Feed the World Sustainably? (Part 1)”